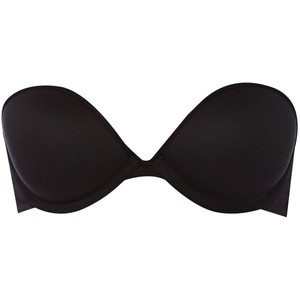 On the way back from the cricket last week, I stumbled upon an interesting article in a freebie magazine on the plane, an article which had I read it a couple of weeks ago, may have had an influence on my latest fashion dilemma. Unbelievably, according to the latest French research, going bra less is actually better for your boobies than trying to hinge them up in M & S’s finest and apparently, left unattended, they will naturally learn to support themselves! Well that’s ok then and  if anyone reading this is brave enough to give it a go, please let me know how you get on, for  a  few weeks ago I experienced another fashion dilemma which again was not an easy  one for a woman of a certain age as unlike the shorts issue,  where really, the decision not to purchase was the  obvious one for any woman with an ounce of pride, this one was a little trickier.

In yet another act of rebellion, (woo hoo, I know, get me), I purchased a very nice black jumpsuit from Top Shop which I decided I could wear to a black tie dinner. The dress code was short cocktail dress but I felt I should practice what I’ve been preaching and opt for an outfit that I actually liked and felt comfortable in. If any one complained I reasoned, I would declare that I batted for the other side and see what they had to say about that!

Anyway, that turned out to be the least of my problems, as the very nice jumpsuit actually had a very low back ,which, I concluded, called for some seriously off piste underwear. But, hey, I was in Glasgow, style capital of the North, if Glasgow didn’t have a solution, no one would. And so it was that  I set about the task of finding suitable cladding for my upper regions, a task that frustratingly turned out to be a lot more difficult than anticipated. What actually amazed me was the fact that there really was so little on offer.  To  be honest I don’t really know what I expected but I expected a little more than the  stick on item I was eventually forced to purchase. Don’t get me wrong, the sales assistant was very helpful but I would now like to get her to elaborate on the ceilidh she attended while wearing the aforementioned contraption as I can’t believe she can have moved much or raised her arms above shoulder height. For when I finally hit the dance floor later on that evening, all hell broke loose and trying to dance with your arms clamped to your sides isn’t a great look for the Queen of Ibiza. To be fair to her, she had suggested that the easiest option was for me to just swing free,  as it was obvious I wasn’t built like Jordan and the outfit was black and high necked, but once again the age thing reared it’s head along with the fear of  some of the male members of our party finding out that I had gone commando. Wearing  trousers to a black tie do was one thing, going bra less was probably pushing things too far.

So sadly, I didn’t do much dancing and to be honest I’m a little cross with myself for not being quite the free, liberated spirit after all as by that time of night, even if I had whipped off the offending item, no one would probably have noticed and my wee boobies could  have swung joyously free to the beat in the aptly named Swing Club. ( that’s Swing club by the way, not Swingers…it hasn’t come to that yet!).

So if anyone out there has the answer to my problem, please let me know, as I really cannot believe that the fashion world hasn’t come up with something suitable that doesn’t involve sticking on or strapping up,  unless of course a low backed jump suit isn’t meant for the un-surgically  enhanced older woman ,who if she dares to shop in  Top Shop  has to live with the consequences.

Answers on a postcard please…..